The digestive system has gastrointestinal tract and digestion organs, including the pancreas, tongue, liver, salivary glands, and gallbladder. Digestion is the process where food is broken down into tiny particles that can be absorbed as well as assimilated into the body. There are three stages of digestion. The first stage of digestion is known to secret gastric to respond to the smell and sight of food. This stage involves breaking down of food mechanically through chewing. Also, digestive enzymes break down a chemical in the mouth. These digestive enzymes include lingual lipase and amylase, secreted by serous glands and salivary glands found in saliva. Saliva is mixed with food to form a bolus swallowed through gullet to enter the stomach. Gastric juice helps to breakdown food in the gastric phase as it passes in the duodenum. Lastly, enzymes produced by the pancreas are mixed in the intestinal phase.

The human stomach is lined with a thick mucus layer to protect enzyme pepsin and humans from acid. In the stomach, Hydrochloric acid mixes with food along with breaking protein through pepsin. This changes the bolus in chime, a liquid substance. It is then moved to a small intestine for two to three hours of full meal processing. Most people tend to feel heartburn; it is caused if gastric acid leaks inside the esophagus. Gullet has no mucus layer; hence it is not protected from the acid. Reduce the production of acid temporarily and heal the esophagus by the use of pump inhibitors drugs.

Small intestines are divided into three parts, including duodenum, ileum, and jejunum. Nutrients from food are absorbed in the small intestines. Absorption is conducted through villi, microscopic projections on small intestines lining. Moreover, the indigestion of gluten may result in the destruction of villi. The most important work of the digestion process takes place in this part. Detergents in bile are bile acids and produced by the liver as a digestive liquid. Fats cannot be absorbed or digested without detergents. They ensure water is mixed well with fats then digest enzymes. Afterward, fat is absorbed in the bloodstream. 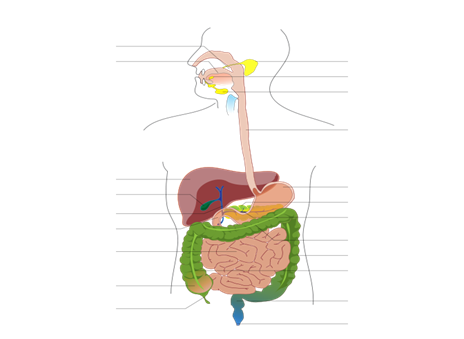 4. The mouth produces a lot of salivae

Saliva is produced by salivary glands through step one digestion. The human mouth is able to secret 1 liter of saliva daily. Saliva contains water and other substances such as stimulation from food. Saliva has enzymes responsible for breaking down food in the mouth. It also acts as a lubricant to soften food in order to ease passage in the esophagus as well as coat food to prevent damage of teeth and mouth.

It takes seconds for food to enter the esophagus and stomach. This is a complex process where bolus enters pharynx as a windpipe organ is covered, and the esophagus open to take bolus. Muscle movements called peristalsis helps in the movement of the bolus. In addition, sphincter muscle bounds gullet on end and control opening as bolus passes down.