Quebec is one of the 13 Canadian Provinces and territories. It borders the province of Ontario by the west and also Hudson Bay and James Bay bodies of water. On the North, it is boarded by Ungava Bay and Hudson Strait. Furthermore, it is bordered by the Gulf of Saint Lawrence Newfoundland and Labrador province to the east and south respectively. In terms of area, Quebec is Canada’s largest province and second largest when it comes to administration. Besides, it is politically and historically considered as central Canada together with Ontario.

Quebec is a French-speaking region and second most populous after Ontario. It is the only predominantly French-speaking province in Canada. The list below contains the five most interesting facts about Quebec.

Almost everybody has heard about this popular Canadian dish. However, only a small portion of people knows about poutine’s origin. This dish consists of cheese curds, gravy, and French fries. Furthermore, it emerged in the 1950s and has since been involved with the Quebec cuisine. Ever since poutine has become a highly celebrated dish in both the country and parts of the northeastern united states. Besides, there is an annual celebration held in Drummondville, Montreal, Toronto, and Chicago. However, the original recipe has undergone many variations causing poutine to gain a new classification.

2. A hotel in Quebec City is the most photographed in the world 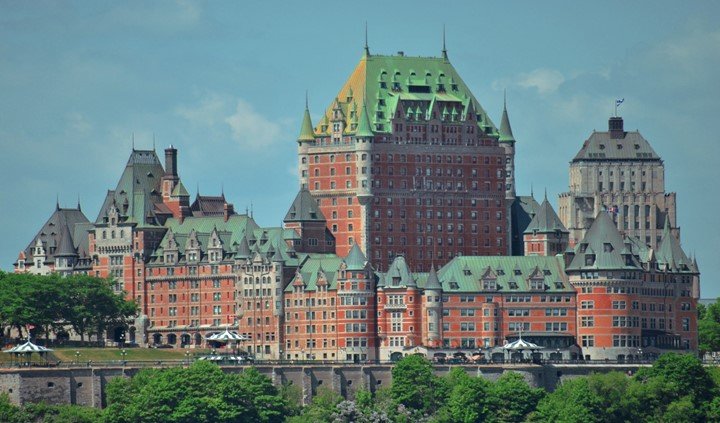 Chateau Frontenac which is now referred to as the Fairmont Le Chateau Frontenac is the world’s most photographed hotel. It’s located within the historic districts in Old Quebec. The hotel was designed and constructed back in the 1800s. However, its doors were officially opened to the public in 1893 and later some other sections were added. When it comes to architecture Le Chateau has become an Icon and appears in most photos taken from the city’s skyline. Besides, this hotel has been known for housing popular people and events such as Queen Elizabeth.

3. A lot of maple syrup is produced in Quebec

4. 80% of the residents in Quebec speak French

French is the official language of Quebec Province. It is estimated that around 80% of the residents are frequent French speakers. Quebecers also speak their native language. Besides, that is one of the oldest French-speaking places in Northern America. But also many residents speak English too. Many speak both languages fluently. It’s hard to come across someone who doesn’t speak English in the province.

5. Quebec City has one of the oldest median age in Canada