Mars is the second smallest and the fourth planet from the sun. It has become a constant point of discussion by both space enthusiasts and scientists. Besides, dozens of spacecraft have been sent to this red planet for exploration. Mars has been nicknamed as the Roman god of war and also as the red planet because of the prevalent Iron oxide on the surface. Just like Earth, Mars is a terrestrial planet that is it has polar ice caps, deserts, craters, and valleys. Besides, the days and seasons can be compared to that of the earth because of the similarities in the rotational axis and period.

1. Olympus Mons is the tallest mountain in the whole solar system

Olympus Mons is a mountain found on Mars with an estimated height of 13.6 mi (22km). That is double the height of Mount Everest here on earth. Besides, it’s also the youngest volcanic mountain on the planet Mars. Scientists believe that the volcano may still be active on the Olympus Mountain despite forming billions of years ago. There is enough evidence of lava flowing. The mountain was formed as a result of exemplifying the basaltic lava flow.

Explorers have gathered enough evidence to prove that Mars has quantities of water. Although most of it exists in the form of Ice. Besides, water also exists in small quantities on the Mars atmosphere as shallow vapor. The planet may also have some flowing bodies of water but it’s not easy to trace them. Other reports show that it might have been covered by oceans in the past. All the water evaporated into space because Mars has a thin atmosphere. The remaining water is said to have frozen. Besides, researchers also discovered the possibilities of an underground lake on the planet beneath the southern pole. 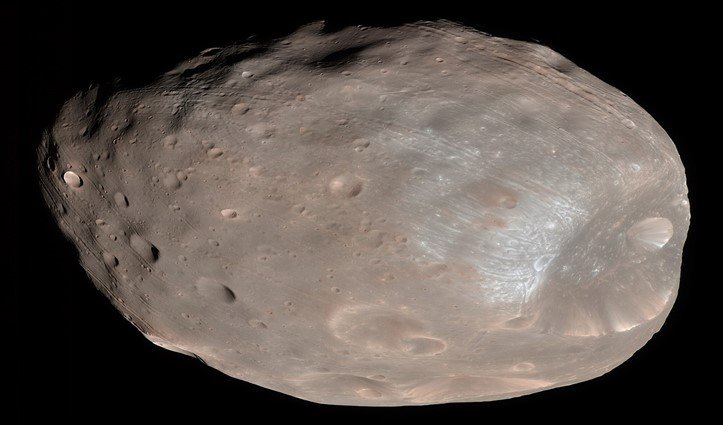 Mars has two moons, Deimos and Phobos. These two moons were discovered by Asaph Hall in 1877. Both moons have an irregular shape and small in size when compared to the earth’s moons. The name Phobos and Deimos comes from the Greek mythological twin characters. Deimos refers to terror while Phobos means fear. They are both sons of Ares who is a god of war. Deimos has a diameter of 7.8 miles while Phobos measures 13.8 mi. If you view the full Phobos moon from the mars surface, you will realize that it looks about one-third of our full moon here on earth.

4. The atmosphere is composed of methane

The presence of Methane gas on the moon’s atmosphere is a good sign that life can survive. Microbial organisms are also able to survive in such conditions. However, the major components of the atmosphere of the moon are argon, molecular nitrogen, and Carbon dioxide. Other components can be found in small traces like oxygen, carbon monoxide, noble gases, and hydrogen.

5. Some Mars pieces have fallen to earth

Planets of the solar system barely exchange materials because of their big and compact sizes. In July 2011, some meteorite carrying chunks of rocks from the red planet fell in a Moroccan desert. These rocks are said to be 10 times the value of valuable minerals on earth such as gold. The scarcity and scientific value is the main reason behind their expensive value. Only less than 100kgs of rocks from the red planet.