Ontario is the second-largest province and home to the iconic Niagara Falls in Canada. It borders the great lakes and the United States. Besides, Ontario is the home of Canada’s capital city Ottawa as well as other major cities such as Toronto. Canada’s capital is well known for the national gallery that features both indigenous and Canadian art. Furthermore, Ottawa also houses the parliament hills of Victorian architecture. The population of Ontario is estimated to be approximately 13.5 million as of March 2019. Ontario has a mineral-rich, vast and rocky Canadian shield that separates grassy lowlands from the fertile farmlands.

Take a look at the most interesting facts about Ontario.

With a gross capacity of 6,430 MW, Bruce nuclear station in Ontario is the second largest. Only the Kashiwazaki-Kariwa plant in japan has more capacity which is 8,212MW. The power plant is owned and operated by Bruce Power and Ontario power generation. The Bruce nuclear plant consists of 8 pressurized reactors with a gross varying capacity of 786MW to 891MW. The Canadian NPP was last commercially operational in 1987. Besides, Bruce 1 was also shut from 1997 until it becomes reactivated in 2012. Hanul power plant in South Korea comes in 3rd place with a net capacity of 5,908 MW.

2. Home to waterfall capital of the world 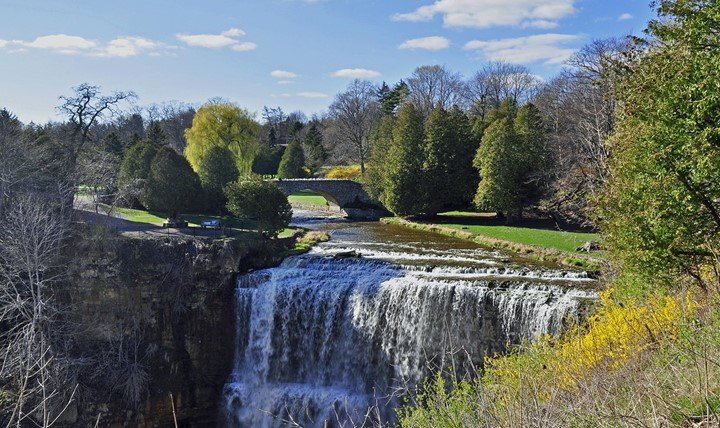 Did you know that the most visited waterfalls in North America are the Niagara Falls? It is dubbed as the waterfall capital located approximately 50 miles to the west. The Canadian city of Hamilton is often referred to as the waterfall capital because of its home to more than 100 waterfalls. The major reason why Hamilton has so many waterfalls is because of its strategic location to the Niagara escarpment. Besides, the escarpments run across different states such as Michigan, Wisconsin, Ontario, and Illinois. Almost all the rivers, creek or streams flowing across the escarpment may eventually result in a waterfall.

3. Skyscrapers use the bottom of Lake Ontario as a coolant

Lake Ontario water is so cold that it’s used for an alternative air conditioning system for skyscrapers. It was constructed by ACCIONA back in 2004 to cool the selected Toronto Buildings. First, the water is drawn from the lake deepest source using a special pump, so that the coolest state can be used for Air conditioning. The rest of the water is supplied to the City’s Municipal. The whole system cost a whopping $100 million to construct within 2 and a half years.

Ontario has a rich and diversified economy. It is the province with the highest GDP in Canada, with more than twice of Quebec which is its neighbor. The service sector contributes a large portion of 77.9% while the manufacturing amounts to 12.6%. Additionally, Ontario is also the most populous province in Canada. A research that was carried back in 2017 shows that the province is also the fastest growing.

5. Two-thirds of Ontario’s provincial area is covered by forests

Ontario’s forest cover amounts to 66% which is about 71 million ha. Furthermore, that makes about 2% of the total world’s forest cover and about 17 percent of Canada’s forest cover. Interestingly the area covered by forest in Ontario is equivalent to the size of Netherlands Germany and Italy all combined.